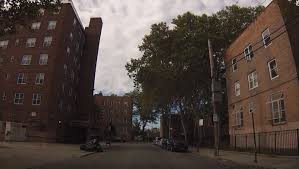 According to Wikipedia, Jamaica is a middle-class neighbourhood  in the New York City borough of Queens. The neighbourhood is part of Queens Community Board 12, which also includes Hollis, St Albans, Springfield Gardens, Baisley Ponds Park,  Rochdale Village, and South Jamaica, Queens. Jamaica is patrolled by the NYPD’s 103rd, 113th & 105th Precincts.

Most Queens neighbourhoods ranked highly in DNAinfo.com Crime & Safety Report, with nine of its 15 neighbourhoods ranking in the top 20. That’s a far cry from the early 1990s, at the height of the crack epidemic, when the borough racked up nearly 300 murders — three times the amount in 2010 — as well as 17,000 muggings, which breaks down to nearly 50 per day.

It was an exceptionally warm Saturday afternoon, as the Peacemakers made their way into the hood of the South Housing 40’s Project.

Before going out we usually approached the local authorities Police to make them aware of our presence, in their Precinct.  This is not because we are expecting trouble, but, because we believe that after a patrol, the transformation begins, and often before the regeneration to come into fruition, the Police should allow the process. Although, sometimes, we have seen immediate effects. During our brief with them, one officer appeared sceptic and said “seeing is believing” when we pointed out some of the changes that  were are expecting to happen to the area, as a product of our patrols. However, we were very thankful that there was at least one officer who said he had heard about our work before, and that he too believed that our Prayer Patrol could possibly bring big changes to the community, uplift the residents and help to reduce crime.” 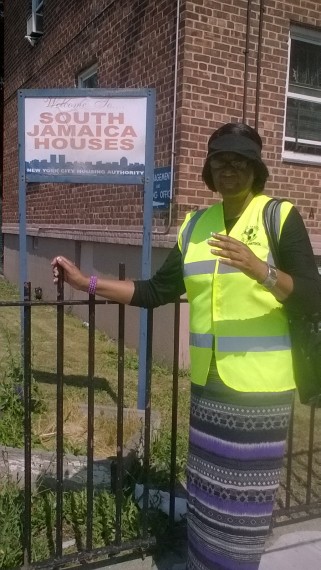 “The first person that we saw was a Muslim man. he chatted with us in a friendly manner, and although he said did not wish us to pray with him,  nevertheless, he also said that he would not mind a blessing. We were happy to bless him, then shook hands heartily before moving on.

We had many favourable instances to speak with, to pray with, to weep and laugh with, to encourage, motivate and bless the members of this community. 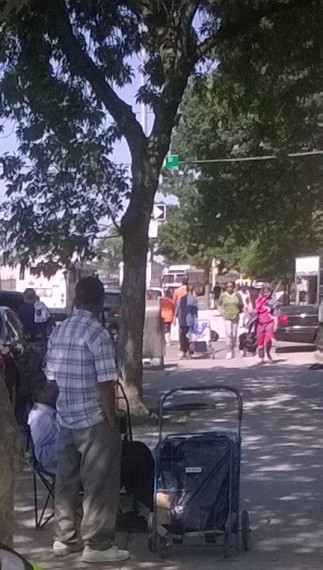 There was also a positive response to our work with great testimonies of encouragement for what we do.

We had a  positive response to our work and great testimonies of encouragement from the residents for what we do. 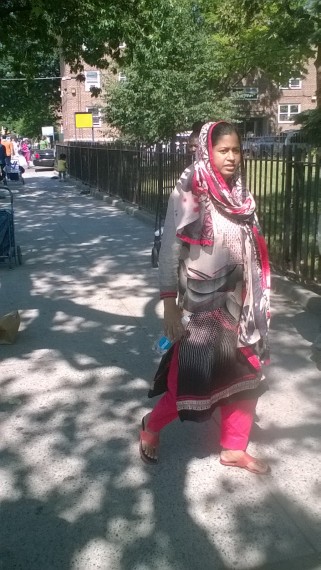 There are so many wonderful stories that we could share with you that took place this day.  However, we will only be sharing half a dozen in this post, adding more in due course. 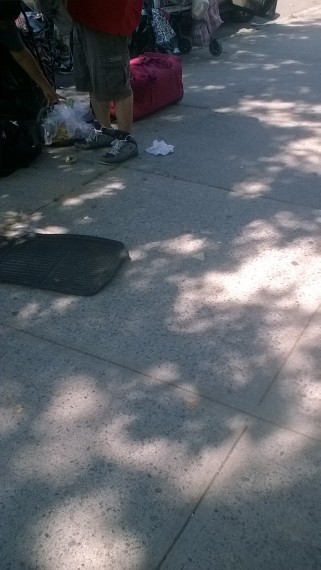 In the Project we found debris of all sorts strewn on the sidewalks, it is a busy area, people sit out in their front yards, on the pavements, standing outside shops, and in a tiny the park nearby, children play, oblivious that there may be danger close by.  And so, we find here a different sort of wealth, it is one of the soul crying out for change. Crying out for a chance for ‘better than this’. This is a people hungry for change”

We stopped to speak with two men and a lady, at first they were  reluctant to speak with us, but, as we explained our purpose and  shared some life-changing stories of our prayer patrols, they began to warm towards us. Our first story is about Joe. We soon learned that Joe’s son, of 24 years of age, was brutally killed only two weeks earlier, near to the very spot on which we stood. 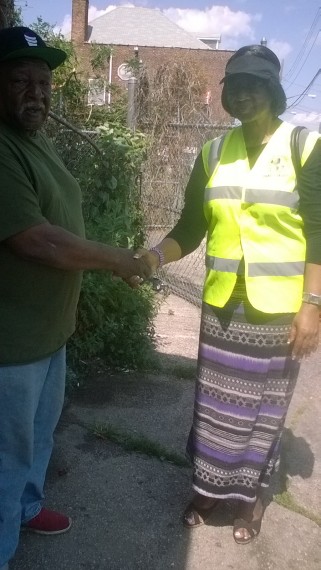 As you can see from the picture, Joe is a tall, strong man. He has two other sons, and the one they killed was his youngest. He was a broken man. he cried as he shared his story. Joe did not ask for vengeance,  instead, Joe was hoping to see change for better in this neighbourhood. Sister Barbara encouraged and prayed with him. And at one point, it seemed as if he would fall out, so we both held him up. After prayer he allowed us to take photographs with him, and when we shook hands goodbye there was definitely a sense that his healing had begun.

Then there is Brendan, 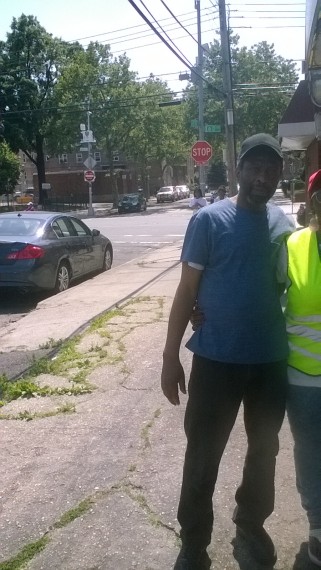 he is smart, feisty and humorous. It is obvious that he had been drinking, but he is not drunk. He said, “if it’s not about money, you might as well just move on.” But a little while later and after we had been speaking and praying with his friend Joe, he spoke with us and we had the privilege to bless his life, and impart some beautiful prophecies, which was very well received.  Before we moved on he said, “O man, I wish that I was in England wid you guys.” ” O man, this is great!” I assured him that Goodness is everywhere, right there, as the life of God in his breath, and not just in England.  As we hugged him, I knew without a shadow of a doubt, that a transformation had taken place, and that he knew it too.

“We were not permitted to photograph Dorothy, the lady that we met with the two men mentioned above. Dorothy was sitting on top of her makeshift seat, along the sidewalk. She is a pretty lady but her eyes and face are sad and depressed.  She has been drinking, and while I do not wish to judge her, I can smell alcohol on her, however, she is not drunk. She says that she wants a blessing too.

As we began to pray with her, I felt empathy towards her situation and the circumstances which account for her present condition. I felt impressed in my spirit to pray for her grandchildren and to prophesy that they will be the catalyst for change in the family, and not just for her family alone, but for her neighbourhood. I felt  vulnerable in during the prayer because she had not yet shared her personal details with us. And soon as the prayer came to an end, and she could hardly wait to take out her cell phone from her pockets, and showed us a lovely photo of a baby girl.

Dorothy’s face beamed as she told us that she was happy that I mentioned her grandbaby, she says that the baby was  born June 4th and was not yet a month old. We continued in prayer to bless the child, and when we had finished we, we gave her a small  token of blessing for the child.  She tucked it into her pocket and set about telephoning her daughter to tell her of the prophecies. And when I indicated to her that she must see to it that the child receive the gift, she  seemed offended, saying,  “Do you think that I could rob my only grandbaby, who is going to do it for all of us.”

And so we moved on knowing that we definitely were in the right place, and at the right time, for this woman and her family” 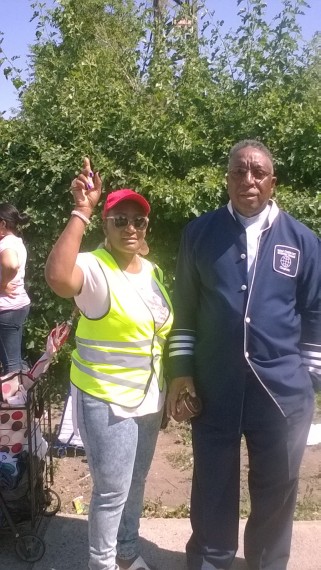 We met up with Apostle Ralph Edwards of  One Way Intl Ministries INC. His Ministry is mainly on the streets but often lends a helping hand to some of the local Churches. 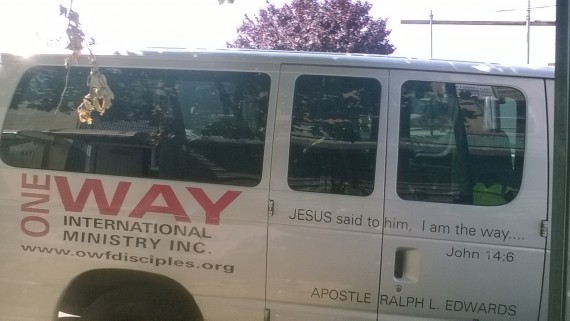 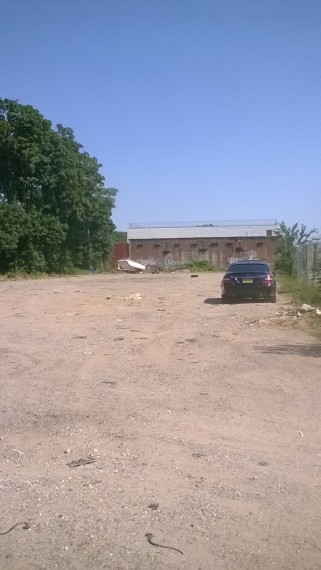 Of this derelict site on the left, Rev says, “It shall surely come to pass that this place shall be a place of sanctuary. A place for new life. A space of God.” Apostle Edwards confirmed that 4 years earlier while he was in the area, at a prayer meeting, he heard the Pastor praying very similar words for the site.”

“And so, as came to the end of our New York Queens, South Housing 40’s Project Prayer Patrols, we cross path with a young man, whom we shall Solomon.  As here neared us, we stopped him, to ask for directions.  Courteously he showed us the way, and, as he was moving away, the Rev said that she was prompted in her spirit to talk with him about the work of the Peacemakers Prayer Patrols. 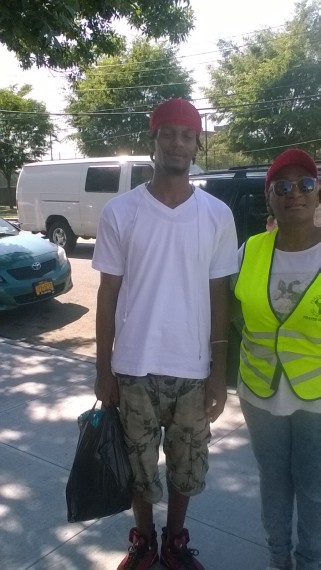 The young man appeared very interested and was attentive to every word, hardly blinking and for the whole time he did not so much as move a muscle.  He agreed to let us pray with him, he thanked us profusely and  with a confident smile on his face, shook our hand and walked away, head held high.  “That’s a King Solomon in the making. That is if he really gets it,” says the Rev.