Peacemakers with deep compassion for the people of Manchester and their loved ones wherever they are, and for the rest of the UK sends thoughts as prayers throughout. And it is from this place of vigil we pray again the words of our motto ” Let Love, Let Hope, Let Peace Reign, we let it be, and so it is.” 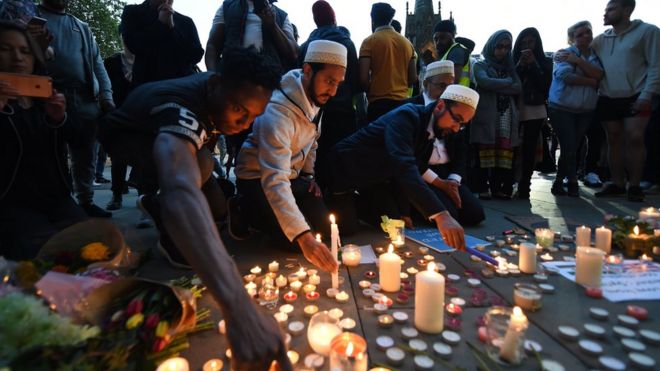 These are external links and will open in a new window

Theresa May has raised the UK terror threat level to critical – meaning an attack is expected imminently – after 22 people died and 59 were injured by a suicide bomber in Manchester.

The prime minister made a statement after a meeting of Cobra, the government’s crisis response committee, on Tuesday evening.

Here is her speech in full.

I have just chaired another meeting of Cobra, where we again discussed the callous and cowardly terrorist attack in Manchester last night, and the operational response from the security service, the police and other emergency services.

It remains the case that, other than the terrorist himself, 22 people were killed in the attack. Fifty-nine people remain injured, and many of them have life-threatening conditions.

As Greater Manchester Police confirmed earlier today [Tuesday], the perpetrator was Salman Ramadan Abedi, a 22-year-old who was born and brought up in Britain.

And as the emergency services have confirmed throughout the day, his victims were innocent children, young people and their families.

Our thoughts and prayers are with them all.

I want to reiterate what I said this morning about the professionalism of the emergency services and the bravery of the people of Manchester. Through their actions, they proved that cowardice will always be defeated by bravery, that evil can be overcome by good, and that our values – the liberal, pluralistic values of Britain – will always prevail over the hateful ideology of the terrorists.

In my statement earlier today, I said that the police and security services needed to investigate whether or not Abedi was acting alone. Those investigations continue. But the work undertaken throughout the day has revealed that it is a possibility we cannot ignore that there is a wider group of individuals linked to this attack.

It has now concluded, on the basis of today’s investigations, that the threat level should be increased, for the time being, from severe to critical. This means that their assessment is not only that an attack remains highly likely, but that a further attack may be imminent.

The change in the threat level means that there will be additional resources and support made available to the police as they work to keep us all safe.

As a result of the JTAC’s decision, the police have asked for authorisation from the secretary of state for defence to deploy a number of armed military personnel in support of their armed officers.

This request is part of a well-established plan, known as Operation Temperer, in which both the armed forces and the police officers involved are well-trained and well-prepared to work in this kind of environment. The secretary of state for defence has approved this request, and Operation Temperer is now in force.

This means that armed police officers responsible for duties such as guarding key sites will be replaced by members of the armed forces, which will allow the police to significantly increase the number of armed officers on patrol in key locations.

You might also see military personnel deployed at certain events, such as concerts and sports matches, helping the police to keep the public safe. In all circumstances, members of the armed forces who are deployed in this way will be under the command of police officers.

Precisely how the military and armed police officers will be deployed is an operational decision for police commanders and Assistant Commissioner Mark Rowley of the Metropolitan Police will be making a statement giving further details at New Scotland Yard later this evening.

In the coming days and weeks, there will of course be many events hosted up and down the country. The police will work with the organisers and hosts of these events, to come to a judgement about how they can go ahead while making sure the people who attend them are safe and secure.

I do not want the public to feel unduly alarmed. We have faced a serious terrorist threat in our country for many years. And the operational response I have just outlined is a proportionate and sensible response to the threat that our security experts judge we face. I ask everybody to be vigilant, and to cooperate with and support the police as they go about their important work.

I want to end by repeating the important message I gave in my statement earlier today. We will take every measure available to us and provide every additional resource we can to the police and the security services as they work to protect the public.

And while we mourn the victims of last night’s appalling attack, we stand defiant. The spirit of Manchester – and the spirit of Britain – is far mightier than the sick plots of depraved terrorists. That is why the terrorists will never win, and we will prevail.