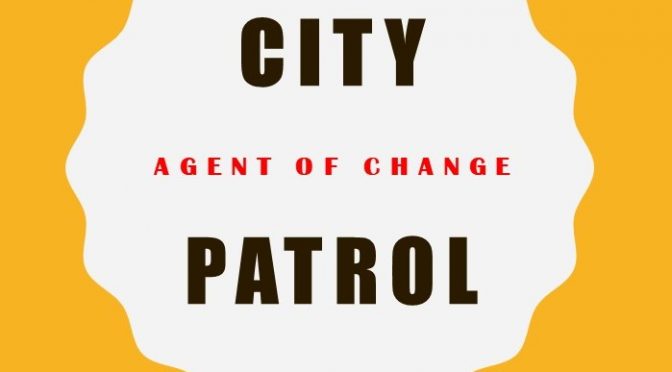 Teams of Peacemakers City Patrols were out and about in the Easton and Old Market areas of Bristol on Thursday 31st October.  as part of their ‘Be Safe Nights’ Initiatives planned for Bristol 2019/20.  They set off from the St. Marks Road at around 6.30 pm, it was dark, wet and cold and the atmosphere outside was charged with the smell of fireworks. 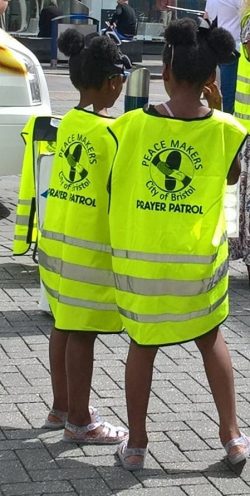 They passed clusters of adults and children dressed in horror costumes going from door to door ‘trick or treating’ along the way, and however innocently this may sound, there is always a chance of danger and ‘bad-will’ so Peacemakers hold that their  visible presence as ‘light’ which will help to ensure a certain amount safety in the areas they patrol.

All Hallows Eve or All Saints Eve was first observed as a Christians remembrance and celebration of the lives of devoted loved ones including saints known as hallows, martyrs and other faithful figures of the day.

The Patrols stopped to pray and to remember the life of taxi-driver Colin Wilson, at the very spot where he was robbed and brutally stabbed and died some years earlier.  At the time Prayer Patrols rallied members of the Easton Community as well people from across other parts of Bristol to join in a Respect4Life March through Easton and St. Pauls. 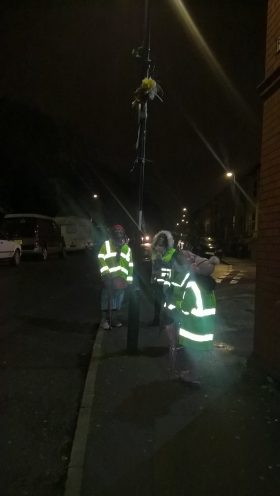 Some Christians abstain from eating meats on All Hallows’ Eve, a tradition reflected in the eating of vegetarians foods such as apples, potato cakes, and soul cakes.

Soulcakes are little cakes, made with allspice, nutmeg, cinnamon, ginger, other sweet spices such as raisins currants with a little cross on top, these were given to the children and poor that would go from door to door begging, singing and offering to pray for the givers and their families, and some even offer to pray for their pets during the month of November. Over time it became a more commercial and seen more as a secular celebration and the soul cakes were replaced by trick or treating giving of sweets, costume parties, carving pumpkins into jack-o’- lanterns, playing pranks, telling scary stories, creating haunting attractions and bonfires. 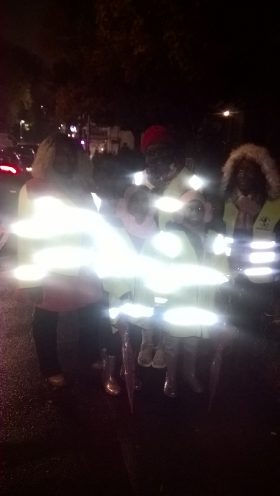 The Patrols aims to be a beneficial visible presence and a source for good during Halloween and Bonfire Nights.  Their Bright Fluorescent jackets can be seen a good distance away, cars. They do not go from door to door offering payers as per the All Hallows Eve Tradition, instead, they are ‘prayed up’ using a modality termed Pre-empt or ‘Operation Presence’.

The patrol from St.Mark’s Road, Easton to Pennywell Road, was fairly unconfrontational until they got to the Goodhind Street area. There they found a medium-sized group of boys, some standing and the others sitting on a low wall-fence. They were swearing and speaking loudly, and a member of the group ran across the road, placed something in a letterbox and shouted  ‘come out you cowards.’  Another larger group of young people ran towards the direction of the Patrols. They were hurling fireworks onto the parked cars, shouting, swearing as they randomly threw more fireworks on the pavement and in the middle of the road. The Patrols then gathered in to pray, then formed themselves in a line and stood motionless in silence. Perhaps it was the light from the jackets and the effects of prayers but the older boys scampered and raced towards Pennywell Road, and a short time later the smaller group also fled the scene too. The night ended peacefully as the Teams gathered in at another crime spot along Stapleton Road where a few years ago a Solamilan youth was viciously stabbed to death.

The next ‘Be safe Night’ Patrol will be in the Broadmead area of Bristol Bonfire Night Tuesday 5th November 2019.  To join the Peacemakers prayer patrol or City Patrols please telephone the Commissioner on 075 083 90298.

Peacemakers are also advising people to report any of illegal activities that they are aware of through CrimeStoppers or directly to the Police 999 in cases of real emergencies. See Crimestoppers number below or because you are already browsing our website you can find more information about this service on Our Partner Organization page or view directly on their website.