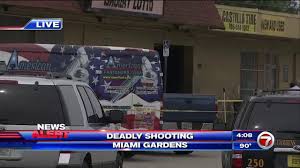 “We have been in some pretty hairy places since the founding of Peacemakers Prayer Patrols in 2002, but Miami Gardens threw up the most concerns. We had Prayer Sheilds in England, Michigan, New York, and Miami. And although this was not by any means the feelings of our team members, it was mainly the small talk of people living in Miami-Dade County. In the Media, there are stories of a shooting nearly every day, with drive-by shootings on the rising each week.  The ages of those involved, both of those being killed as well as those carrying out these killings, seems to be getting younger.  See HERE ( 3 Teenage boys arrested for Shooting a 17-year-old boy April 2016 ) The suspects, one age 16 and the other two 15, are expected to be charged with first-degree murder and attempted first-degree murder.  Watch   NBC Miami News 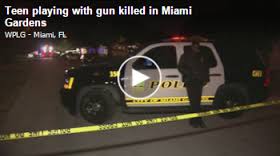 “As Chief and as a father, tragedies like this are heart-wrenching because in total four young lives have been lost. We must continue to work together to bring an end to such senseless and heinous acts of violence,” Police Chief Antonio Brooklen said in a statement. “As tragic as this incident is, the Miami Gardens Police Department is committed to the mission of making our community safe. We will not tolerate anyone who threatens the safety of our Residents or our community.” To see NBC NEWS Click HERE > 23-Year-old shot at House Party   Alexandra Dean had just graduated from Nova Southeastern University in May. She was on her way to becoming a nurse and helping others. But that dream was cut short in an instant.

The Peacemakers found a receptive response to their Prayer Patrols at the small rank of shops, that had been the scene of a shooting not long ago. 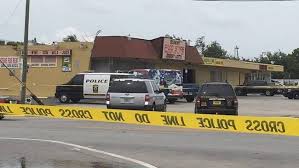 They were determined that Prayer Patrols would have an impact on the areas.  Reverend Palmer explains it like this – “WE really are Patroling the heavens, which directly impacts on the environment and atmosphere of a place. Every place that our feet patrols, creates an opening for peace, peaceful dialogues, and the removal of the spirit of fear,  in order to bring about harmony, peace and safety, to that place. I know it sounds like a tall order but that is my belief, and I have seen it work in some very tough neighbourhoods. Of course in Cities where there are greater confidences by the patrolling teams that join us,  by members of local community, by the Council  and usually by the Policing teams within these areas, we find that we usually receive encouraging testimonies of healings and transformations.   And although we did not have  all these dynamics in place, we did, however, get a good response from the Kingdom Builders Church Intercessory prayer department, 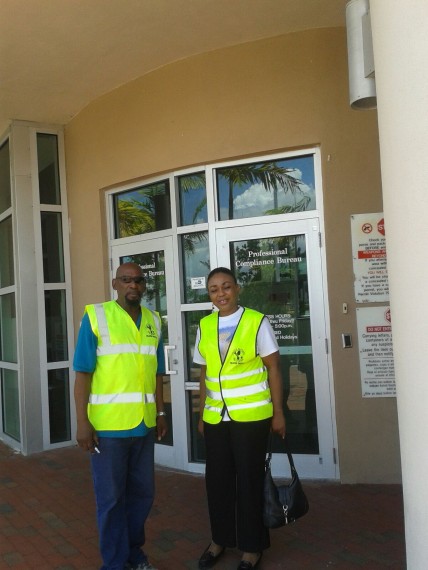 some as Shields praying for us, and some of their Leaders came out with me for Saturday’s Miami Prayer Patrol.   We were told only a day before our patrol that Eric Readon, Pastor of a local Church in the Miami Gardens area, had spoken out against the recent youth shootings. and has opened up his church, one night a week, so that parent could drop off their youths in a safe environment. We did manage to make contact with him, unfortunately, due to our short notice, neither he nor any member of his organisation were able to join us for the Prayer Patrol.

WE met and spoke to a youth who was working the Supermarket’s trolly carts, in the car parking lot. Whilst driving to Miami Gardens the Rev shared a vision that she had, it was about a mother kneeling on the floor, crying.  In the vision the woman was in a semi-empty, broken down home, she was holding her stomach and crying profusely for her son. She was crying, wishing that he would be safe, wishing that he would not get caught up in the shootings that were going on around all her.

So, as we approached this young man, Rev shook his hand and asked his age.  He said that he was 19yars old. she said, “No you are not”.  He repeated that he is 19.  “You wouldn’t lie to a Pastor now?” she asked him. ” No,I would never lie to a pastor,” he said. It was obvious that he was not 19, which he admitted later, perhaps our high visibility jackets scared him. When we asked what would he like prayer for, he said, “Please pray for my mother to have a house.” Rev then told him about the vision that she had had on her way there, and that she recognised him as the young man in the vision,  he did not appear alarmed in any way but was  rather attentive and happy for us to pray with him.  Some time later, we did see him again but this time, he looked a lot calmer and was more cohesive.

We chatted and prayed with several people which we all receptive and happy  for us to speak and pray with them. This includes a group of three beautiful young ladies that we stopped to talk and pray with. After prayer,  the most outgoing of the three thanked us and said that she really needed the prayer and kind words of encouragement.  Reverend Nzurike supported and prayed offering them an invitation to  learn about prayer and the effectiveness of praying, at  her upcoming Gathering of the Intercessors event, which is being held mid-August at the Kingdom Builders Church, 168 St.

We stopped one guy that seemed drugged up and totally ‘out of it’. However, when we asked what he would like us to pray for he told us that his aspiration was to be a businessman. He said he was still in school. Decon Samuels did his best at encouraging him, spoke to him about the importance of a good education etc,, he was just on the verge of engaging with us, when, seeing a Police car turn into the carpark area, close to where we were standing, he quickly scampered and sadly, we did not get the chance to say our goodbyes.

Next, we spoke with a Police Officer while he sat in his car.  He told us that he was impressed by what we were doing, that he believes prayers are powerful and makes a big difference in difficult situations and people. He said that if he could retire early this is exactly what he would like to be doing. 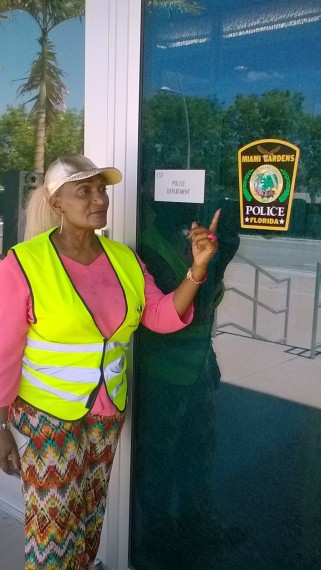 We had a frosty response from the first white male police officer we saw at the front desk in the reception area of the Police Station. Whilst explaining about Peacemakers Prayer Patrol he became uninterested and told us so.  In a grunt, he  told us to speak with the female officer at the window next to his.  She was a lot friendlier and very courteous. 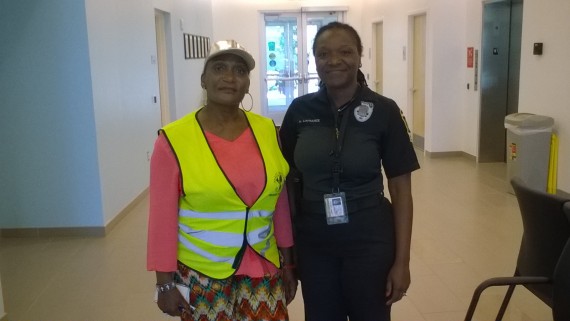 She was interested in our work and wanted to know more about how we see prayer patrols making a difference in this area.  This we did as well as sharing a few successful testimonials to our credit. Although on this occasion we were not able  to speak with the Chief, we did, share a few stories with the Sargent in charge Timothy Adams. explaining that we were there to pray a blessing of protection for officers, especially in the light of what had taken place in Dallas earlier that week, as well as paying tribute to the work of the good officers of that precinct. He appeared attentive, courteous, interested and supportive.            Photo  Above: Reverend Dawnecia at the Police Station.  Photo middle  The Rev with Front Desk Officer Agnes Lafarence ? Photo Below from left to right. Reverend Lillian Nzurike, Reverend Palmer and Deacon Samuel. 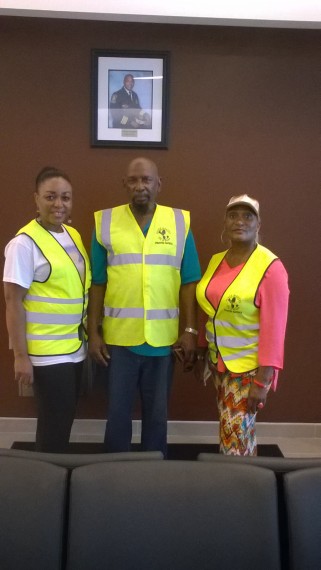 The first officer continued to maintain a cold, non-responsive attitude throughout the visitation and before we left the Rev asked him why he had treated
her in such a manner. He replied  that he was not interested, he did not wish to know,  and that he was not being mean to her  and that he was just being busy trying to finish a report. Reverend Palmer said that in all the years of Peacemakers Prayer Patrols, in many countries of the world, this was the first time that she had experienced such a distasteful attitude from a first respondent individual, to either her or any member of her groups. When we were outside the station we prayed that there would be just policing in all Miami Police Force. We also prayed for their safety.

Instead of the Driveby shootings of bullets, we created a new idea of ‘Driveby Prayers’ as we cruised through the walled areas of Legume Gardens. It was a very tensed area, smaller houses that all looked the same and was in need of repairs. Many areas were unkempt and the few persons we saw walking about appeared glum.

Our Final prayer Patrol was the City Hall. Here we prayed for justice, equality and safety for all Council officers, departments and workers. 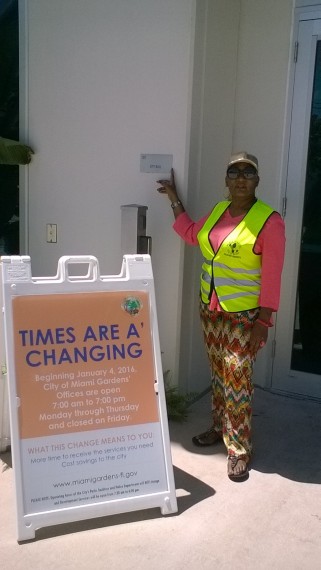 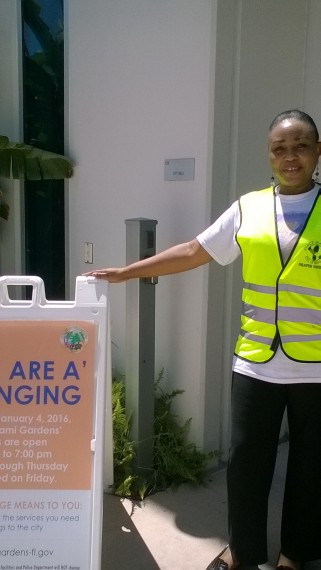