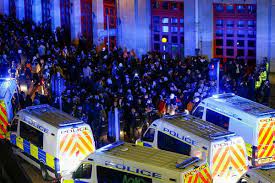 PEACEMAKERS Prayer Chief speaks out in the aftermath of the violence and unrest following a peaceful Kill The Bill Protest that had been planned for Bristol. In her letter below sent to various media as well as the police, she calls for peace and a halt to violence, criminality, and disruption to peaceful communities. She is hoping that her prayerful intervention will create a wave and air of peace bringing some level of peaceful understanding, especially in the light of further protest planned for the coming weekend. Police are advising people not to gather.

Peacemakers have been successfully working behind the scenes for street safety with Virgil, Patrols, Marches, and Awareness Campaigns in Bristol since 2002 when violence was rife in St Pauls and Easton area.  They were also part of winning the City  Purple Flag status, which helps to attract a greater number of visitors into the city center at night and hopefully reduces negative perceptions about Bristol’s city center.

Reverend Palmer is asking for people to join with her and her team in praying for peace. “If you do not already pray or even know how to pray, then you can use the words of the prayer on our site.” **See below.

To whom it may concern

Whilst we cannot undo or wish away the violence, criminality, misbehavior, and mishandling of the recent Protests on both sides of the law here in Bristol; neither should we be complacent and silent.

I for one do not condone or excuse the use of violence on persons nor the destruction and damage to property.

It is a sad day for Bristol and for the years of hard gruff between parties, communities, and the police, to build a level of trust and civility.

My prayer today is for peace and order to return, for a new way of communicating and listening. For openness, peaceful protests,  and freedom of speech, to be handled with higher levels of competency and conscious awareness.

I pray the Spirit of Peace over the citizens,  constituency, and constabulary of Bristol. May order return. May violence and fear find no place to hide or grow here. May those with the tendency to destroy and cause harm be found out, arrested, handled fairly and charged accordingly. Then, may the Presence of the ALL GOOD grace our city, releasing it from the shadows of thuggery and violence. Let fairness, equity, justice, and respect for life, and property, be the order of Bristol. This is my Prayer. Amen.