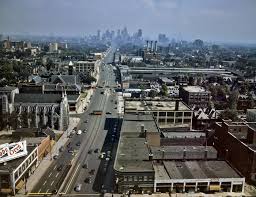 Police: 7 die in ‘Random’ Michigan shootings; Suspect held...was the horrific news that I awoke to today, Sunday 21st February 2016. This news was especially heart wrenching for me because I was invited to Michigan in 2011 to introduce the strategy of Peacemakers Prayer Patrol for the areas of downtown Detroit and Flint in particular. This I did on and off for three years, but alas without much success in finding sufficient voluntary coherence to implement my Vision for visible Prayer Patrolers on the streets.

Churches: There were a lot of Churches and lots of prayers going on, with many soup runs and welfare projects for the poor.  But behind the scenes there were gross territorial warfare between the various groups fighting for their own zones,  denominational and cultural clashes, and exclusivity sometimes to the point of exclusion where new or unfamiliar ideas such as Peacemakers was often treated as interfering and threatening.  Is it little wonder that the war on the streets continues to rise?

The visibility of Prayer Patrols in any area makes a huge difference in terms of the regeneration and safety as well as building more cohesive neighborhoods.  PPP was introduced in Bristol in 2002 following fatal shootings, massive drug trafficking and other violent crimes on the streets of St Paul’s, later spreading into the neighboring borough of Easton.  PPP Working alongside other Peacekeeping agents such as the Police, members of the local community and  other Community Engagement Projects, saw remarkable changes within a short space of time.   The visibility of the Peacemakers was recognized and awarded by The Police Constabulary and local Government for their part in helping to build peaceful community relations, safer streets and confidence in the area.

“Today, amidst the tears sorrow, pain and grief of both the peoples directly and indirectly associated with these abominable acts of violence, a crime against Life Itself, I pray for Peace.

I pray that Peace would heal the broken hearted and comfort those who mourn.  That the retribution of Divine love would so arrest the heart and souls of the perpertrators that the City can rest knowing that they will not strike again.  May the venom of hate and terror be overcome fully as agents of Peace we pray in unison for Peace to reign once again in Michigan,  throughout the United States, the Middle East, Europe, Africa, the Isles  and every inhabitable place of our world.

In Love and Hope for Peace.”

Reverend Dawnecia Palmer is a Spiritual Teacher, Visionary of The LIfe University LC . Life Alchemist /Soul Doctor for Life the   Magnificent Way Now Principles, and Founder of the  Peacemakers Prayer Patrol Int.  The Rev is a Global Community Activist, who is passionate about Global Peace.  She resides mainly in the UK, in-between her ongoing ‘Peaceful Earth Missionary Trips’.

One thought on “PRAYER CALL for the City of DETRIOT….ALERT”